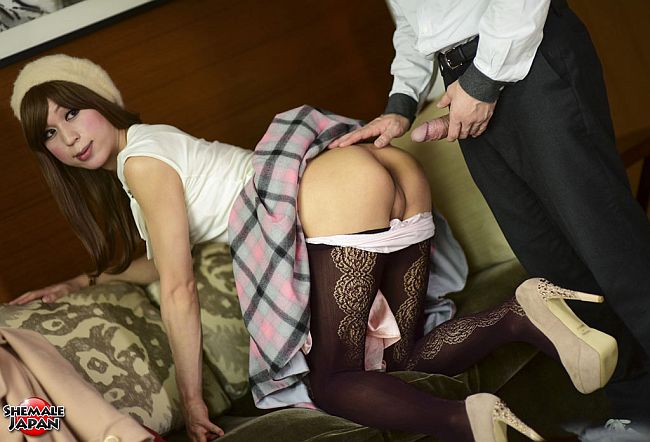 Strait into the action, she lifted up her skirt and paraded herself in front of Hiro, her cock already bulging behind her panties under the tight nylon screen of her sexy pantyhose. Hiro reached out and felt the ridge of her excited cock, standing stiff and erect and poking it’s head above the waistline of her tight panties.

Chihiro stripped off her clothes and stood close to Hiro, wanking his cock as he reached behind her and ripped a hole in the rear of her designer pantyhose. She knelt on the sofa with her ass cheeks exposed through the hole in the seat of her pantyhose, then Hiro got on his knees and rimmed her tight, little anus with his tongue.

Hiro handled her stiff rod and tugged the shaft down between her thighs, her balls tightening in their sack as he teased her butthole with a circular motion of his thumb. He inserted a finger up her tight anus and fucked it, while sucking and slurping on the purple bell end of her magnificent cock at the same time.

Hiro lay back on the sofa and Chihiro straddled his thighs, then he grabbed both of their hard cocks and wanked their oiled up erections together in his hand. He then pushed his throbbing member up her tight ladyboy pussy and the meaty flange of her penis thrashed around as she bounced up and down on his stiff pole.